Low Power Variable Optics (LVPO’s) have been flooding through the firearm market for years now, likely due to the proliferation of medium-range carbines. It didn’t take long for shooters to realize the value of variable low power optics, but what makes an LVPO shine over another?

I’ve had several different models from a wide range of manufacturers, and today we will discuss in depth the US Optics TS8X.

The Tactical Sport 8 power LVPO is one of several great scopes I’ve been able to shoot in the offshore line of scopes from USO. So far they have proven to be a great option for shooters in my opinion. I have been shooting USO scopes for many years now, and to be completely honest I was a bit worried when I saw they were releasing a more affordable line of scopes. My concerns were quality and performance, for which USO’s are well known. My concerns were assuaged with the TS20X, which quickly became one of my favorites. The TS8X has so far been just as good an experience.

Why an LVPO?
I also have the TS6X, which is the little brother to the TS8x. I wanted the 8X because having used several 1-4’s and 1-6’s, I wanted just a little bit more power for seeing those downrange targets. Again in my opinion, a 1-8 or 1-10 is about perfect for a medium range rifle, for distances around six to eight hundred yards. The TS8X fit that spot perfectly in my estimation, and with the RBR Reticle, it would give me plenty of holdover points for shooting at those further distances.

Features
The TS8X features a 30mm tube, with adjustable diopter eyepiece, covered turrets, and an illuminated front focal plane reticle.
Many manufacturers have moved to the 30 or 34mm scope tube now, it gives a larger tube to pass light through, as well as allow a larger erector to increase the internal mechanical movement of the scope. The parallax is fixed for 100 yards, which leaves the diopter eyepiece focus the only adjustment for the image seen. This is common in most LVPO’s, particularly in this price range. If I had one wish for the TS8 it would be adjustable parallax, I frequently shoot well beyond 500 yards with this scope and others like it. The ability to adjust parallax for those distance targets would be very welcome.
Another feature that thankfully is becoming more commonplace, is the reticle placed in the front focal plane (second focal plane models are also available at a lower cost). This means the reticle is magnified with the power setting of the optic, keeping the reticle values always the same regardless of power setting.

The RBR reticle is illuminated red, with an adjustable rheostat for brightness. It also features both MRAD hash marks (both whole and half) as well as range based holdover points, including wind holds at five and ten MPH.

With the stiff competition in the LVPO market, the TS8X fits in the middle ground of price range. There are many options that are far less in price, and many others that cost double, triple, or more.
My initial concerns about quality were more based on mechanical performance and robust construction. I knew that due to its price point, it would likely not have the same optical quality as scopes costing more, which I was okay with.
Speaking of optical quality, I found the image to be bright, and clean. Not much to complain about there, but don’t expect to see the same image as a $1600-$2400 scope.
I found the RBR reticle to be very useful at distances out to nearly 1000 yards, at 8X it could possibly be a little thick for tiny targets, but I don’t expect many people will be doing benchrest or squirrel hunting at that range. For real world shooting, such as echo targets inside 600 yds, it is perfect. The rifle its currently mounted on will be doing some coyote hunting, and I’m very confident that anything inside 800 yards will be easily identified, targeted, and engaged using the RBR.
As I mentioned above, the reticle features both MRAD marks, as well as estimated drop and wind marks. This is handy, because if you need an honest elevation or wind call, you have the actual MRAD values. Whereas if your shooting at the aforementioned coyote, you can use the drop values according to how far away he is. 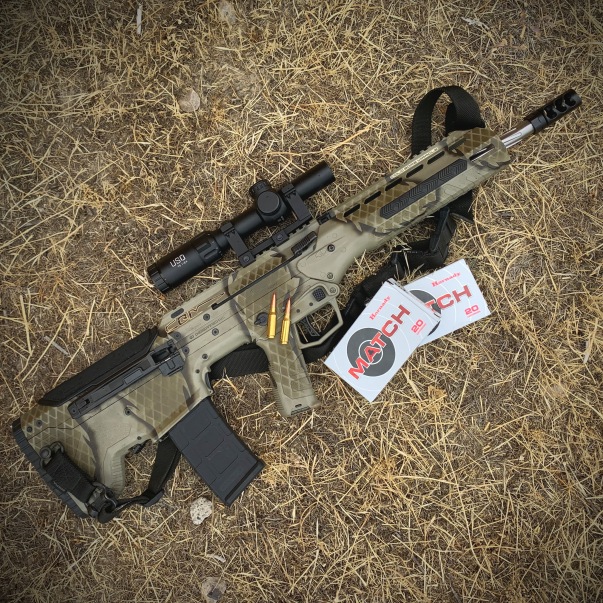 I mounted the TS8X on my Desert Tech MDR, which at the time was a sixteen-inch 223. The scope was easily zeroed with no tools, and in no time I was shooting steel all over the range.

I love using the scope at 1X, with the reticle lit up, it is just like using a red dot scope. Up close shooting at steel, animals, or whatever else is easily done with both eyes open. Cover the target with red as you break the trigger will give you sure hits.
I then switched out the barrel for the new Hornady 6mm ARC barrel, to see how the TS8X would match up to its ballistic curve.
Without even rezeroing the scope, I was in business, perhaps more a testament to the rifle than the scope. I later made a few corrective adjustments, and the rifle was punching centers very consistently. The click values of the turrets seemed to be close enough to values marked, but to be honest, I hardly had to move them.
Stretching the rifle out would require using the drop points indicated on the RBR reticle, I figured they would be close since the 6 ARC is not too far off of the 223 trajectory it is based on.
It was close enough to be dangerous that is for sure, at 960 yds I shot over the target. The 6 ARC has less drop than a 223 at that distance, so I held a corrected hold (7MRAD) and a bit of left wind for a perfect center punch hit.
I followed it up with a few more shots to confirm, inside I was giggling like a child watching the trace of my bullets on the way to the target.

I’m not sure if its the TS8X or just better optics that we are spoiled with today. When I first started shooting these farther distances, it seemed like 10X was barely enough, and 15-25 was more like what you needed for shooting long range. But I found shooting almost everything inside a kilometer to be relatively easy with the 8X of this little USO.
I guess the technology is catching up, soon one thousand yards will no longer be a long range benchmark. It will be more like medium range for drills at a beginners carbine class. If you find yourself on that spectrum, the US Optics TS8X will fill the need for a medium range optic. And it will do it without needing a signature loan to checkout, and you’ll still have the quality and guarantee US Optics has always put on their scopes.
-CBM