Im a sucker for scopes, you might say I have a weak spot for them. I have used most of the very best scopes, and Ive also used many that weren’t worth straining my eye to focus through them. Part of my affliction is due to being spoiled for some time now, and I blame US Optics for it, at least partially. I have had several of them over the years, and they have earned their keep in my safe.

US Optics has a history for robust builds, with nail driving strength. They have seen many changes over the years, and we could argue surely over the pros and cons. But for me, only one thing matters, whats on-top of my rifle, and how does it perform.

As a riflescope addict, I was interested when US Optics launched their Tactical Sporting line of scopes, the TS Series. Like any true addict I rested not until I had the TS 20 in my hands. It was love at first sight.

My initial impression of the TS 20 was its weight, it seemed light for a USO. This new TS line was clearly a more economical series of scopes, so I expected a simpler construction. Lightweight, and a very clear and clean image were both very welcome features. The JVCR reticle was new to me, and well received. I prefer the newer “Christmas tree” style milling reticles, and I found the JVCR to be very handy to use. The offset two tenth windage holds made perfect sense when hurriedly making a wind call. And like most good reticles, even numbering to keep track of your holds. With as many as ten mils to hold over, and five wide for windage, it makes a perfect companion for todays ultra-flat shooting rifles.

Another feature that impressed me very quickly was the focus/parallax adjustment, which is adjustable down to ten yards. At first I didn’t think it was a big deal, but when I dialed the scope down to 2.5X, I realized that this scope could almost be used like a red-dot. If I ever had any up close shooting to do such as approaching a wounded animal, I could simply turn on the illumination, and mark the target with the red cross and pull the trigger. This to me seemed like a very handy feature for a scope I would surely use while hunting. And yet with the max power of 20X from the scope, there are few things I would not be able to shoot at inside my distance envelope.

The turrets of the TS20 are ten MIL per revolution, that for me is a minimum. Long gone are the days of five MIL per turn scopes, that was so 2010. The clicks are clean, and you can both feel and hear them as you turn the turret. The TS20 has an interesting zero-stop feature, but it requires you to limit the rotation to one turn only. Not a big deal for many things, but since I like to live on the edge, I decided to pull any stops and run it wide open. One complaint if you’ll allow it, the turret housing isn’t numbered to help you keep track of what revolution you are on. Bit of a pet peeve of mine, but not a deal breaker by any stretch. The tension of the turrets, power ring, and focus knob were all just right, not too hard to turn, but stiff enough to avoid accidental movement while packing it around.
I already mentioned the parallax/focus adjustment, but just next to it on the left side of the scope, is the rheostat to adjust the illumination on the JVCR reticle. It’s your standard 1-10 clicks with an off position in between each setting. 10 is bright enough to use as a red-dot in dim daylight, and 1 is dim enough to use with night-vision and thermals.

With 24 useable MILS of elevation from its 34mm tube, the TS20 is a very useful long range tool. The rifle it currently commands only needs 5MRAD of elevation to get to a thousand yards. But even if you are shooting a 308 you wont have a problem getting way out there. But with it’s super low power setting, and 28 ounce weight, it is a good option for a long-range hunting rifle as well.

In the field the TS20 performed exactly like every other USO I’ve ever fielded. Click values were consistent, and lined up with my known ballistic data. I keep coming back to it so forgive me, but I love the high and low range of this scope. I never thought I would want a 2X precision rifle optic, but I sure am glad I have one now. In the field was the best place to see the value.
I am not huge on high magnification, I rarely use my scopes above 20X. So the TS20 is right in the middle of where I want all my X’s. Even at max power the image is still clear, and the reticle is very useful. Even so, I usually find my power ring somewhere between 10 and 15. It is at those medium settings that I find the optical magnification and reticle proportions to be ideal, both for targeting, and making corrections.

I mounted the TS20 on three different rifles, first on my Desert Tech SRS A2, and then on my MDR. Regardless of which caliber I was shooting I had every confidence that the TS would keep up. Whether it was hunting varmints on the foothills around my home, or chasing big game like mule deer or elk through these big Rocky Mountains. I’ve never had to worry about my US Optics scopes while traipsing through the brush, and no amount of bumps, drops, or bouncing around in the bed of a truck has ever knocked them out of zero. The heavy recoil from my 300 Remington Ultra Mag didn’t phase the scope, and neither did the repetitive cycling of my 450 Bushmaster MDR, it just kept on ticking.

The Tactical Sporting Series of scopes from US Optics looks like it has a bright future. The scopes are well made, and fit a price point that opens the door to a less expensive market than historically available to those wanting US Optics products. The premium Foundation Series remains the flagship of US Optics quality, I may need to get one of those too, but for now I will enjoy the view from this little TS20. 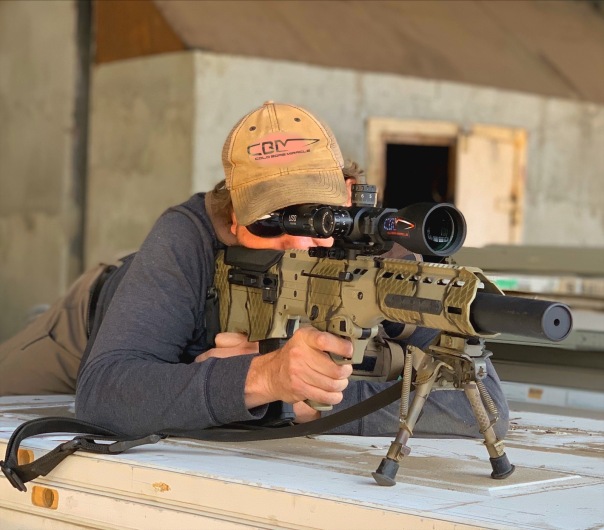