The good folks at Patriot Valley Arms helped get me started down this road, what seems like a very long time ago. Good people and good products are the norm for PVA.

I was given the opportunity to test drive PVA’s new 6.5 line of solid hunting bullets. Hunting is my bread and butter, so I was excited to put these lathe turned solids into action.

The 123 grain Cayuga bullets are turned from solid copper bar stock, using the same alloy of copper that jacketed bullets use. Turning them on a CNC lathe gives precise control to bullet geometry, it is this precision cut construction that gives the Cayuga its uniformity.

The bullets are solid copper, with a hollow point cut into the tip. They have a tapered boat-tail, and a driving band around the middle. The gentle taper of the ogive makes these bullets very generous when it comes to seating depth sensitivity.

I cautiously loaded these bullets into some 6.5 Creedmoor brass from Petersen, with a goodly charge of H4350, and took them to the range. Initial groups were easily sub MOA, and with little adjustments, I had them shooting around half an inch.

It was time to hit the track on this test drive, a Rocky Mountain Elk hunt. Some might think that a 6.5 Creedmoor is a bit light for elk, which it may be. But I’d hunted with similar setups plenty of times in the past, so I wasn’t worried.

The first engagement we had with an elk took place at 475 yards, a young cow stood quartering away. The bullet hit her at the top of the left side rib-cage, on a slightly down angle. It passed through the ribs, passed through her lungs leaving quite a mess, and exited the front of her chest just to the right of her neck. She dropped immediately, and slid down the snowy slope. Damage was exactly what I expected to see from such an acute injury. Broken bones, spalling through tissue, leaving mayhem in organs which could no longer sustain life.

The second Cayuga fired at a big game animal was a mature cow elk, chewing away at the brush bark on a cold winter storm blown mountain. She was 520 yards away this time, completely unaware of the heated copper cutlass headed her way. It again impacted in the ribs and shoulder, breaking both the shoulder blade, several ribs, as well as one of her vertebrae as it passed by. She instantly dropped, and bled out as quickly as one would expect.

The damage done on both animals was very proportionate to the size of the expanded Cayuga, unfortunately both of them blew right through the animals so I was unable to see their final dimensions. Never the less they did a perfect job, and I couldn’t have asked for more. 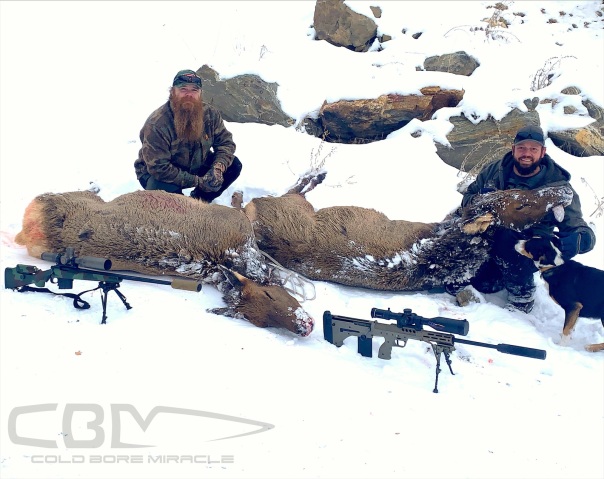 If you are in need of an all copper hunting bullet, or if you want a hunting bullet with an extremely high ballistic coefficient, then give these Cayuga bullets a good look. When the shots count the most, send something that brings it all.